The Best DDoS Protection Hosting: Who’s The Best for Your Site In 2023

When choosing a DDoS protection service, look for mitigation tools like firewalls and traffic filtering. You'll also want to pay attention to technical support and the type of monitoring provided.

DDoS (distributed denial of service) attackers can bring your site — and your business — down within minutes. Not every web host provides quality protection against DDoS attacks. Hosting companies specializing in DDoS protection typically use various techniques to protect your website, including third-party CDNs (content delivery networks) like Cloudflare and proprietary software. Here’s a quick take on the best three hosts for DDoS protection:

How Did We Choose the Best DDoS Protection Hosts?

We evaluated over 1,000 hosting plans, shortlisting the ones that provide specific distributed denial of service (DDoS) mitigation tools, like firewalls, traffic filtering, and denial of service (DoS) defense systems. Next, we checked which plans provided excellent technical support and proactive monitoring. We validated this list against real customer feedback, analyzing our huge database of user reviews.

What Is a DDoS Attack?

DDoS stands for “distributed denial-of-service.” A DDoS attack occurs when a network of computers is used to send a large volume of bogus traffic to a web server, using up most of the server’s resources so that legitimate traffic is unable to access the server.

The web server’s resources are maxed out by the requests. This usually results in legitimate website visitors being unable to access the website. DDoS attacks are a convenient method for hackers and e-bandits to ransom legitimate websites and businesses. Protection, therefore, is vital.

It might be easier to understand DDoS by way of analogy. Think of a web server as a store. If a large group of people wanted to block access to the store, it would be simple.They could do so by all walking into the store at the same time, clogging up the entries and walkways in the process, thereby preventing legitimate customers from being able to access the store.

DDoS attacks can be carried out continuously for an extended period of time and can shut down a web server and any websites or services that rely on that server.

Some DDoS attacks are crimes of opportunity. Some hackers love to knock down some poor site that doesn’t keep up with security standards. Others are more targeted. A hacker might have a grudge against a site owner and launch an attack.

Is Your Website at Risk of a DDoS Attack?

When starting a new website, many individuals and businesses assume that they don’t have to worry about DDoS attacks. The fact is, all websites are at risk of this type of attack because it is so common. According to the latest Netscout DDoS Threat Intelligence Report, there were more than 6 million global DDoS attacks in the first half of 2022, and that number continues to go up each year.

If you are running your website on a shared hosting server (which is the most popular type of hosting), your site may be at risk even if it is not targeted. Shared hosting allows multiple customers to share the system resources on a server for web hosting. If another site on the same server gets targeted, your site can experience slowness or go offline.

With this in mind, anyone who wants to run a website needs to take the threat of DDoS attacks seriously.

How to Choose DDoS Protection Hosting

You should choose your hosting provider carefully if you’re concerned about DDoS attacks.

There are several things in particular that you should ask about, as follows: 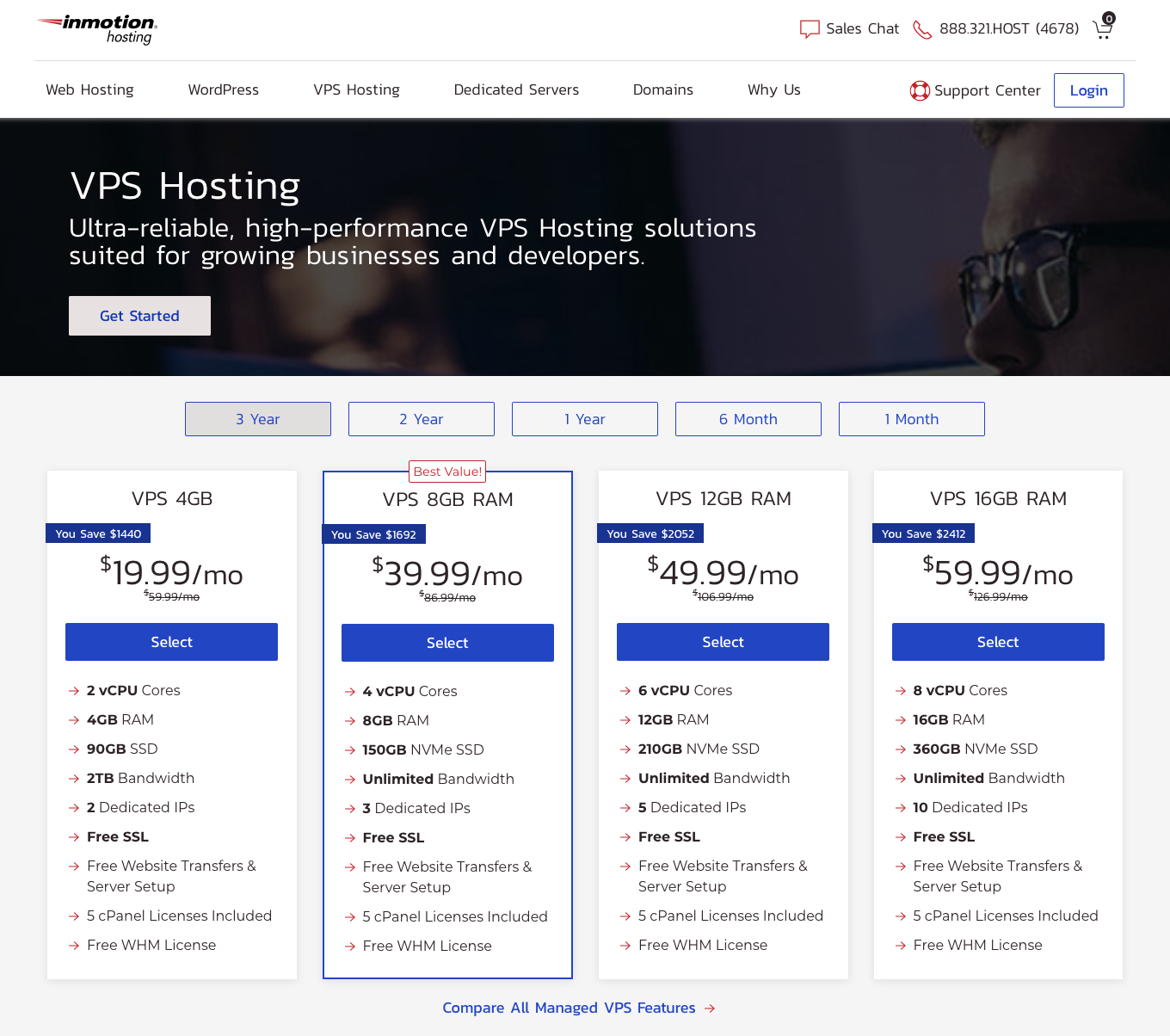 InMotion is one site that offers DDoS mitigation. InMotion Hosting takes server security seriously. It provides DDoS protection on your VPS (virtual private server) hosting without additional cost. Its specialized server structure provides a barrier against attacks. InMotion also has a dedicated expert team of system administrators who work to defend your home on the web. The 24/7 technical staff that will do their best to resolve any security issues.

Pros and Cons of InMotion

What customers are saying about InMotion 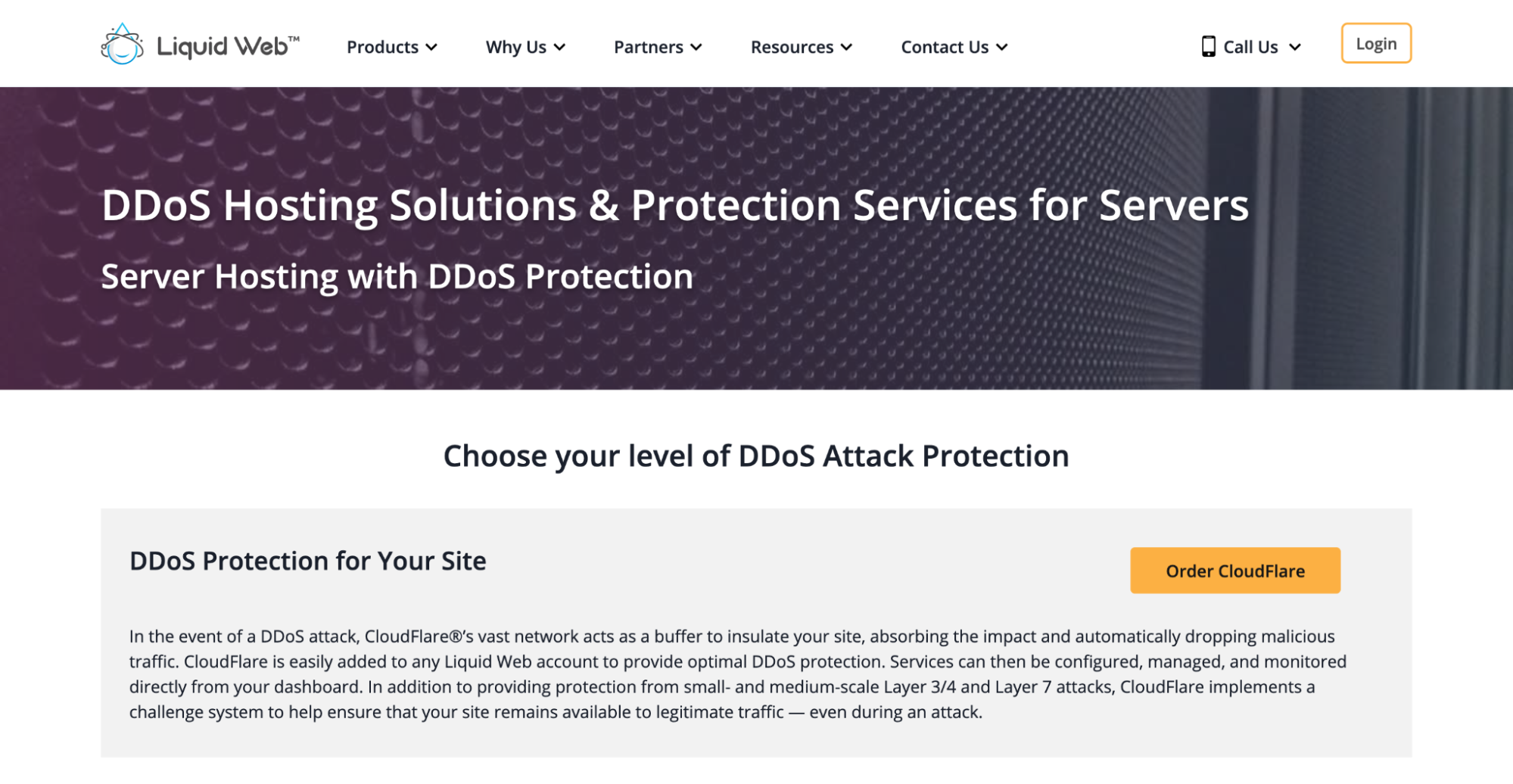 Pros and Cons of Liquid Web

What customers are saying about Liquid Web

Liquid Web is known as one of the best managed WordPress hosting companies that allows you to easily host many websites. The tech support is open every day of the year, but there are some billing and customer service issues.

Visit A2 Hosting
Why it’s best: Provides volumetric mitigation at 250 Mbps to two gigabytes per second

A2 Hosting to help you keep your site safe. It provides a high-capacity reinforced DDoS protection to increase the likelihood that your site will not be impacted by these malicious actions, expertly locate an attack, and provide quick mitigation if one occurs.

Pros and Cons of A2 Hosting

What customers are saying about A2 Hosting

A2 is a reliable, affordable hosting company that has fast speeds. The customer service is generally responsive, but could use more updated tutorials and documentation.

The free Cloudflare plan includes activating “I’m Under Attack” mode. If your site is under a DDoS attack, activating this mode will help block much of the illegitimate traffic while letting through real visitors.

Can a DDoS attack cause lasting damage?

In most cases, the effects of a DDoS attack are temporary. However, a subset of DDoS attacks called permanent DoS (PDoS) attacks involve attacking known firmware vulnerabilities and damaging them or replacing them with malicious software. The result is that the affected piece of hardware is rendered unusable until it is repaired or replaced.

Should I pay a DDoS ransom?

If you ever face a DDoS attack coupled with a ransom demand, most internet security experts advise against paying the ransom. If you do pay it, you can expect a short-lived reprieve followed by a renewed attack and another demand for payment. When facing an attack, the best thing to do is to find partners, such as your hosting provider, who can help you fend off the attack.

A botnet is a network of computers infected with a malicious Trojan horse. It allows the malware's author to use the computer to send out specific internet transmissions. A single botnet controller can cause thousands of computers to simultaneously and continuously attempt to access a specific website or online service. You can rent access to a botnet, and some botnet controllers rent to cybercriminals who carry out DDoS attacks.

Tomcat JSP Hosting: We Just Found The Best (And Worst) Hosts For Java Developers In 2023.

Apache Tomcat JSP is a web server and servlet container favored by a select set of developers. As such, not… Read More

Your logo is the "face" of your business. It helps people visually and instantly recognize your brand and what your… Read More

Best IMAP Hosting In 2023: Read This Comparison Before Pressing Send

A Plesk control panel can work on either a Linux or a Windows web server. If you're used to Plesk… Read More

The Best Video Hosting Sites of 2023