Does a VPN Protect You From Hackers?

A virtual private network or VPN is a great way to enhance your privacy online and keep your business activity and personal information safe. But not all VPNs are created equally, and no VPN is entirely bulletproof.

You’ll need to understand the following questions we answer below to help you decide which VPN will best protect you and your business:

What Is a VPN?

A VPN is a privacy tool that allows your device to send and receive information securely, even while connected to a public network.

Your phone or computer communicates with a website or app by sending a request and receiving a response. When this happens over a public network, that data is transmitted in a way that can be seen.

Someone with access to the network can see the request being sent and the response being received and could, in theory, intercept that information or inject bad data in the middle of the interaction.

With a VPN, those communications are made private. The VPN creates an encrypted connection between your device and a private, secure server that serves as your secure go-between.

When your device sends information, it is obscured by the encrypted tunnel and sent to the remote server, which communicates with the website or app for you. The same thing happens when it receives information back: The server gets it first, then sends it to your device through a secure connection. 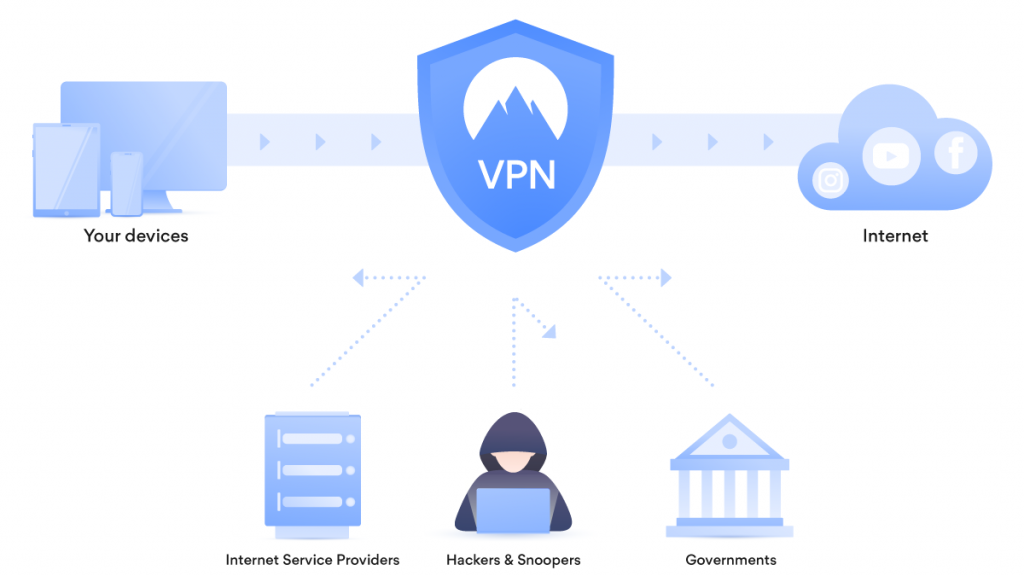 A VPN protects your activity so hackers or malicious actors on the same network as you cannot see the information transmitted to and from your device.

It also obscures your IP address, shielding you from remote attacks and distributed denial of service attacks.

Because the hackers don’t have your IP address, they cannot target you to attack your device or flood you with traffic that crashes your connection.

How Does VPN Encryption Work?

VPNs work because of encryption, which effectively scrambles data to make it unreadable.

On an unsecured connection, your data is transmitted in plaintext. This is readable data that anyone who is on your network can conceivably see.

A VPN uses an algorithm to encrypt your data, turning it into an indecipherable mess. If anyone were to intercept it, they would only see a scramble of letters and numbers.

There are several kinds of encryption protocols that VPNs can use, but they all seek to accomplish the same task: Keeping your data secure.

How Do Hackers Circumvent Encryption?

While good encryption effectively protects your data and prevents hackers from gaining access, it is not bulletproof. There are several ways that a hacker could circumvent encryption and gain access to your data.

The first way that a hacker gains access to your data is by breaking the encryption. While most VPNs today use a type of encryption that takes thousands of years for an average computer to decrypt, it is theoretically possible that someone could reverse engineer the encryption and gain access to the data.

This is extremely time-consuming and requires a lot of computing power, but it is possible.

Another way that hackers circumvent encryption is by stealing the keys. This technique has little to do with you and everything to do with the company responsible for your VPN service.

If their security is lax in any way, hackers could break into their systems and gain access to the key that allows the VPN server to decrypt data.

They Can Exploit Human Error

As with just about anything in the world of online security, the weakest link is human. Suppose a VPN provider creates a vulnerable network that is easy to exploit or one of its employees becomes compromised.

In that case, hackers can access the information needed to circumvent encryption to gain access to your data.

Unless you are doing high-profile or high-value work, it is unlikely that you will be directly targeted in an attack.

However, if a VPN service becomes a target and you use it, you may become a victim of such an attack, even as collateral.

How Can a Business Protect Its Data?

On top of using a VPN, you can take several simple steps to help further secure your data.

How Can You Verify a VPN Is Secure?

Selecting a secure VPN is tricky because, while all of them promise to keep you safe online, many options fall short of what you should expect from a secure VPN.

While there is no sure-fire way to guarantee that your VPN is 100 percent safe, look for the bullet points below. They help indicate that a VPN is secure:

The Difference Between Cyber Security and IT Security

We know what you're probably thinking. It's quite commonplace for most everyone to use the terms cybersecurity and information technology… Read More

What to Look for in a VPN for Your Business

With so many virtual private network (VPN) providers out there, looking for the right VPN for your business can be… Read More

Is Text Messaging Secure for Your Business?

Computer, network, and cloud security may be major concerns for your business, but have you considered the security of your… Read More

Does a VPN Protect Your Business From Trojans?

I love Greek mythology. The "Iliad" and "Odyssey" are some of the most interesting pieces of literature of all time.… Read More

What Is a Firewall and How Does It Work?

The internet was an absolute marvel when it was created. People from around the globe could share information with anyone,… Read More