Resources for kids and adults who want to build and program their own robots.

Robotics is the design, construction, operation, and use of robots. But this definition is rather uninspiring. What is a robot? What can you do with robots? And how can you build your own?

This article will show you:

Find What You’re Looking For

A Brief History of Robots

Robots are machines that can carry out actions (or series of actions) automatically. The term encompasses a broad range of devices, but in general, they can:

Robots are typically programmable. They can be guided with control devices that are external or embedded within the robot itself. A robot can be fully autonomous, or it can be completely subservient to its control mechanism.

Over time, robots have become more and more complex. Today’s robots are tasked with jobs that were once performed by humans but are now deemed overly repetitive, dangerous, or occurring in environments that would be hostile to humans, such as outer space or on sea beds.

What Can Robots Do?

There are many applications for robots, and not all are complex — some are simply toys for toddlers. Here are just a few examples of the tasks they carry out:

You can get a good idea for the future of robotics by looking at what robotics companies are doing today.

Robotics Business Review, a leading online source of robotics news and information, publishes the RBR50. It’s a list of the most noteworthy companies in the robotics industry. Companies on this list were selected based on their innovations, groundbreaking applications, and commercial success and potential. They’re tackling issues in healthcare, logistics, and aviation.

Some of the more well-known companies on the RBR50 include:

Getting Started with Robots

Not all robots are highly-complex machines. Some can be quite simple, such as this introductory robotics toy for kids. The sky is the limit when it comes to elementary robotics projects, so here are some resources you can consult for ideas:

Once you have the ideas, you may need to purchase additional materials, such as electronics components and microcontrollers. You can get these at your local hardware, hobby, or electronics stores, or you can order them online from retailers like Amazon, Maker Shed, Parallax, and Robot Shop.

There isn’t set standard for how robots should look, so the sky’s the limit when it comes to design. Robot designs can range from ultra-functional (such as those used on automobile manufacturing lines) to sleek machines that are as aesthetically pleasing as possible without sacrificing function (such as iRobot’s line of vacuum cleaners).

Robots can look functional or sleek. The functions that you want your robot to carry out will influence its final design.

When you’re designing your robot, you’ll need to identify:

For an in-depth treatment on how to design the best robot for your needs, see Robotics Design Process.

The parameters you identify will impact the final design of your robot after it has been constructed.

Control is one of the biggest things you’ll have to work through when designing and building a robot.

There are many ways of controlling robots, each offering the robot itself a different degree of autonomy:

You could also find a balance between both approaches.

Hooking an external controller up to a robot is the easiest way to get started. Using the controller, you’ll issue instructions to the robot, which will then respond to your commands. A robot controlled in this manner typically has little or no intelligence.

To take this a step further, you can switch from a tethered control to a wireless one, which reduces the need for a physical connection between the person controlling the robot and the robot itself. Such implementations typically involve infrared transmitters and receivers, which requires line of sight between the two.

However, if you don’t want these kinds of limitations, you can utilize other methods of communication, such as remote control (R/C) units or Bluetooth. The latter also offers for two-way communication.

By including a microcontroller and motor controller in your robot, you can program your robot to carry out specific tasks.

For the Young (and Young at Heart)

There are plenty of robots aimed at children. They’re excellent products for adults looking for a gentle introduction to robots, too:

While robotics can be a solo activity, it doesn’t have to be. Conferences and trade shows are great ways to meet up with like-minded hobbyists, researchers, and other enthusiasts. They’re also great ways to get information on innovations: 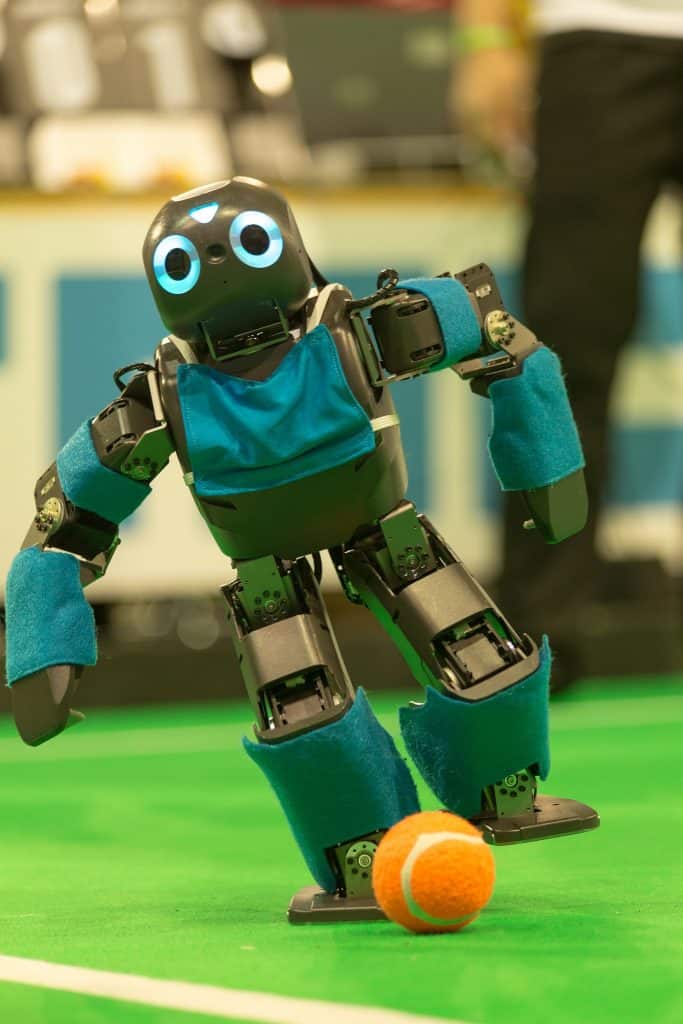 If you’d like to try your hand at robotics competitions, you can enter your creations to RoboCup, SparkFun’s Autonomous Vehicle Competition, RoboGames, or the SRS Robothon.

I’m overwhelmed — where do I start?

Kahn Academy is known for its easy-to-understand information. It provides tutorials on building home-made robots. You might also consider getting a kit aimed at school-aged children since these will include everything you need to complete a project, as well as detailed instructions (see the section above entitled For the Young (and Young at Heart).

What’s the best way to learn to program for robotics?

If you don’t have any programming experience, the LEGO Mindstorms line is a great way to get started. The products are readily available, and the tutorials online are top-notch.

You can get started with very little money and use commonly-found household materials, but in general, you get what you pay for when it comes to robotics. As you build increasingly complex machines, you’ll probably find yourself buying more expensive materials. As always, you can look for specials and deals to save money.

While robots are capable of some impressive feats, not all are ultra-complex machines. In fact, many are simply hobby projects that you can easily complete yourself. It’s quite easy to get started with robotics and using the resources presented in this guide, you’ll soon have your own robot army.